Mr. Fonty's cousin is getting married in Newport, RI on Labor Day weekend. I decided to make a road trip of it and start the week off in NYC with my in-laws. While in New York, we are staying in Tribeca at The Greenwich Hotel. This hotel is all sorts of gorgeous. No two of it's 88 rooms are alike, which sort of seems like a designer's heaven (or hell). Some rooms are rustic, some serene, some glamorous, and yet they all seem to be exactly what I would want for my own home. How does that work!?

I should forewarn you that I will be an instagram fiend. Those green walls! Those draperies! I'm obsessed with that orange sofa and pillow The Bathrooms:
A girl can dream.... 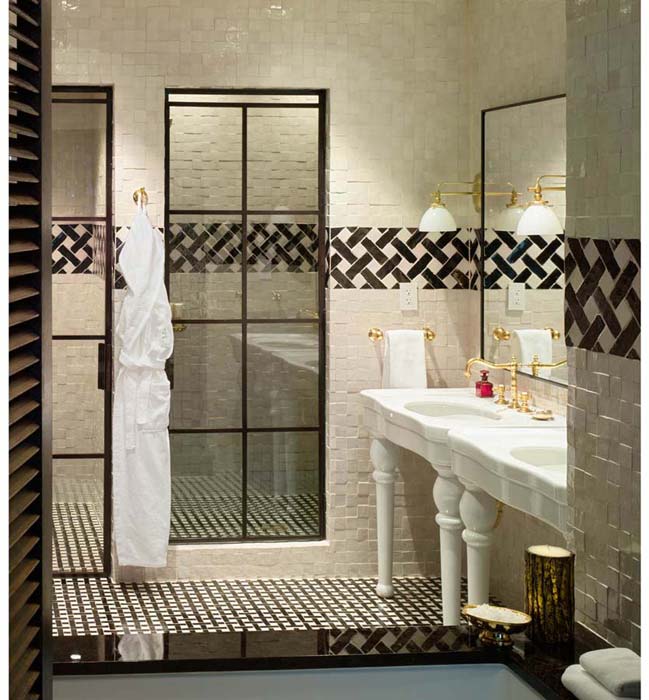 Splurge vs. Steal: Blaze the Trail

We are off to Asheville, NC this weekend to celebrate Heath & Molly, the future Mr. & Mrs. Milligan. From the minute Molly came on the scene, we all knew she was a keeper for our Keath. Cheers to you both, and many more weekends of freeloading off the Milligans on Sea Island. I know that's right!

Being in the mountains, Asheville is always about 10 to 15 degrees cooler than Athens which means August brings perfect evening temperatures for dancing under the stars. One could grab the standard pashmina to stay warm, but why not look a little edgier, and top that dress off with a blazer?
(The "Steal" side has some real gems this week. That dress is $98 and those adorable tassel earrings are only $50. Although, I am really thinking my closet could use an Equipment blazer for fall... )

Last weekend, Mr. Fonty and I went back to my college stomping grounds, Tucson, AZ, for a weekend getaway. He had a band playing in town, and I had not been back since I graduated, which is shocking.

It could not have been a more perfect weekend. Driving into town, I had butterflies of anticipation.
Living in Athens, another college town, even in the 5 years I have been here, so much has changed, but Tucson, aside from new student dorms and a bustling downtown, has remained almost exactly as I remembered it. I was expecting to be sad at coming back to a city I didn't recognize, but that was not the case at all. It was as if time stopped 10 years ago, which was a welcome surprise for my reminiscing heart.
Mr. Fonty was coming in from Boulder. I picked him up at the airport, and we headed straight for one of my hang over favorites, East Coast Subs. I can't tell you how many meat and cheese laden sandwiches and baskets of fries my girlfriends and I consumed at this place over the years. It's disgusting, but in the best possible way. East Coast has changed locations, but the new one (especially the bathrooms) feel like it has always been there.
From East Coast, we cruised campus, making a pit stop by my old sorority house, Alpha Phi. It is as perfect and classically Arizona as I remember it. #prettiesthouseontheblock

Then I took George to campus...


After walking around campus, we earned some beers on University Ave. First stop Frog N Firkin, then Gentle Ben's for Blonde Ales in honor of Katie K.

While at Ben's, we spotted a typical T-Loc. That would be a cat in his Baby Bjorn. Meeeeeeow!

After getting good and buzzed on cold brews, we checked into our hotel, The Arizona Inn. This place is so magical. I remember coming for brunch, walking around or visiting when someone's parents were in town, but to stay here is like being transported. It was such a retreat from the city. Every afternoon at 5, there is an ice cream social by the pool. We timed our arrival perfectly.

The grounds are impeccable. I could wander through this place all day long.

When I was in school, downtown Tucson basically consisted of Hotel/Club Congress, The Rialto, and blacked out late night meals at The Grill. This is certainly not the case now. There are tons of new restaurants, breweries, and bars. We got drinks at Hotel Congress, and enjoyed the incredible evening weather.

Phoenix's  Pizzeria Bianco, which my brother said changed his life, opened a week earlier in Tucson, so we put our name down for the 2.5 hour wait, and wandered the city until it was time to eat. We popped into HUB which is a brewery and creamery - how dreamy! But we both agreed the place smelled like a cheap sushi restaurant, and didn't have a very good hangout vibe. We then went to Playground, which obviously becomes a super cheesy night club after 10, but in the early evening, the rooftop deck was perfect for taking in a sunset. And before we knew it, it was time to eat.

It was worth the wait. I had the Rosa - Parmesan, rosemary, pistachio and onions.

The main reason we were there was to see New Madrid. They are on an extensive west coast tour. They played at one of Tucson's art gallery turned music venue spaces. I had been to an exact replica of the space 10 years earlier. It was like entering a weird dreamlike memory. It took me about 30 minutes into the set to figure out when and why I had been there before.
It couldn't be a trip to Tucson without  hitting up the old standby, Dirtbags. It is after all, "a part of growing up". The sorority girls had just arrived in town, so George got a taste of U of A co-eds, and decided that if he has a daughter she will not be allowed to be a desert woman. Fair enough.

With a hangover (for me), we hiked a bit of Sabino Canyon the next morning. It was such a gorgeous day.

I earned my Brad's Beef from Beyond Bread. This might be the one food item I miss the most. Grilled sandwich with: roast beef, sharp cheddar, green chilies, onions, and russian dressing. Heaven between two slices.

Then after a day spent reading and rejuvenating by the Arizona Inn pool, we hit up The Shanty. The patio is still as quaint as ever.

Then we headed back downtown for dinner and more drinks.

It was such a perfect trip. I am still riding a nostalgia high. It was so fun to be back in a place where I couldn't even picture where I would be a day after graduation, let alone 10 years later. Now I live in a city I probably had never heard of, and am married to someone I couldn't have imagined. Life is funny that way. Thanks, Tucson. I love ya! Until next time...
No comments: